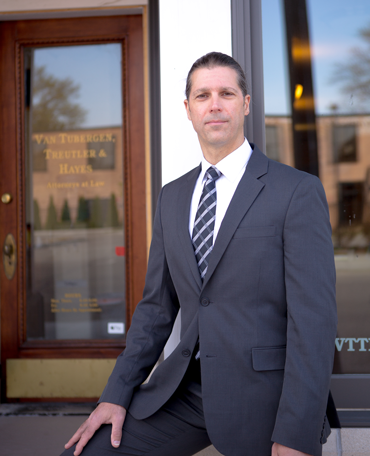 John’s legal ability has won many cases, but John’s understanding, knowledge and experience is what wins the trust of his clients. He has won academic distinctions like the Corpus Juris Secundum Award in Contracts and Civil Procedure while earning his Juris Doctor degree. He is admitted to practice in Michigan, South Carolina, North Carolina, Oklahoma, and Pennsylvania, before the Supreme Court for the Eastern Band of Cherokee Indians and federal courts in Michigan, North Carolina and South Carolina.

John began practicing law in 1997. The majority of John’s career has been with a specialized litigation firm in Charleston, South Carolina. While there he acted as lead counsel in over 50 jury trials before becoming a partner at Van Tubergen, Treutler and Hayes, PLLC located in downtown Grand Haven. Van Tubergen, Treutler and Hayes is a general practice law firm and John’s primary focus is on family law, civil litigation, personal injury litigation, business and estate planning.

John is active in the community where he is a member of the School Board for West Michigan Academy of Arts and Academics and sits on the Board of Directors for Legal Aid of Western Michigan.

While John Hayes’s biography demonstrates his legal accomplishments, those who know John will tell you of his passion for cycling. A former State Criterium Champion and a member and former president of the LowCountry Racing Team, John has published articles on bicycle awareness and safety; he holds a USA Cycling Category 3 racing license.

John lives in Grand Haven with his wife and children.