Football season is upon us which means football fans everywhere will be attending parties to celebrate America’s latest past time.  , Parties often include drinking.  Many football fans get behind the wheel of a car and head for home after having a drink or two. “A lot of people feel fine after having a drink so they think they are okay to drive,” Grand Haven Lawyer, John Hayes said.   “Even though someone may feel okay to drive doesn’t mean they should drive. I believe anyone who has had a drink or two should have a friend who hasn’t had any drinks be the designated driver after a party.”

People often get pulled over on their way home from a party because of a burned-out taillight or because they didn’t use a turn single, only to find themselves taking a breathalyzer test and a sobriety test to determine if they are under the influence of alcohol. “Most people think that having a drink or two won’t cause them to fail a test,” Hayes explained, but that is not always the case. “If a person fails one or both tests, they will likely have charges filed against them.”

Over the years, Hayes has represented people who fail a sobriety test for reasons other than being intoxicated. “Not everyone can walk a straight line or say the alphabet backwards,” Hayes said. “A physical problem unrelated to drinking can cause a person to fail a test. I recommend that anyone who has a physical problem that might cause them to fail a sobriety test notify the officer who pulls them over as soon as they get out of the car to take the test.”

Knowing your rights and having a lawyer who knows how to fight for your rights can make a big difference when charges have been filed. 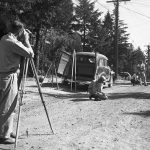 DO YOU REALLY NEED A LAND SURVEY?Blog