FIVE THINGS THE MICHIGAN MARIJUANA LAW DOES NOT ALLOW

The law does not allow you to use marijuana in public.

“People need to be very careful about where they use marijuana,” Lawyer Mike Van Tubergen said.  “I think this part of the law may get overlooked by many people and they could end up getting in trouble.  It is still illegal to light up a joint in a ‘public place’.”

People cannot use marijuana in a vehicle.

“Like alcohol, it doesn’t matter if a person is driving the vehicle or a passenger in a vehicle; marijuana cannot be used while the vehicle is in use or in a public place,” Van Tubergen noted.

People who decide to grow marijuana can’t let their growing operation be seen by the public.

The best way to avoid this is to grow it inside an enclosed structure or have it concealed behind a privacy fence.  “The bottom line is the marijuana plants must be out of view where people can’t see them. This includes people walking or driving through a neighborhood,” Van Tubergen added.

An obvious thing users can’t do is to bring marijuana onto school grounds.

Marijuana users are not allowed to drive under the influence of marijuana.

“This is certainly a ‘gray area’ in the law because people are interpreting this differently.  It is clear that anyone feeling the intoxicating affects from cannabis are prohibited from operating a motor vehicle,” Van Tubergen said.  But what about someone who uses recreational marijuana on a Saturday and drives to work on Monday?  The current drunk driving law in Michigan states that a person cannot operate a motor vehicle with any presence of a Schedule 1 controlled substance in your system. This could be interpreted by law enforcement to mean anyone operating a motor vehicle with THC Metabolite (which stays in your system for 30 days) as being illegal.  “The current drunk driving law directly conflicts with the new marijuana law. I think the new law trumps the old law (which makes its illegal to operate a motor vehicle with any presence of THC in your system) but the reality is the law is open to interpretation and the courts are likely to issue interpretations that are subject to litigation for years, ” Van Tubergen added.  For this reason, Van Tubergen recommends that anyone who is interested in using recreational marijuana and continuing to drive their car (when not under the influence) obtain a medical marijuana card.  The “Medical Marijuana Act provides protection for medical marijuana patients from prosecution. I think the safest route is to simply obtain a medical marijuana card.”

If anyone in the Grand Haven, Spring Lake or Muskegon area has any questions concerning the new Michigan marijuana law, contact VTH-Law.  We will gladly answer those questions. 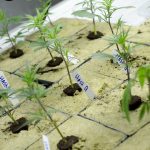